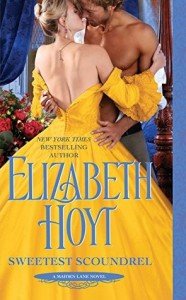 Sweetest Scoundrel by Elizabeth Hoyt
My rating: 5 of 5 stars

I wish that people who think that all historical romances are light and fluffy would read any of Elizabeth Hoyt’s books. They are dark, gritty, emotional stories wrapped around a romance. This book sticks with that successful pattern.

Eve and Asa are about as real as you can get. They don’t live shiny, perfect lives. They are survivors.

Almost all of the characters from Ms. Hoyt’s past novels make an appearance in this one. It not only serves as a “semi-epilogue” for those previous books, but it also shows that everyone needs a support system. Asa thinks his family doesn’t support him, but when it counts, they are there for him. Eve thinks that she is not wanted in polite society, but finds out that she actually has a group of people who do sincerely care about her.

There is mystery, and violence. There are “bad guys” and “good guys”. There is explosive sex. There is tender sex. There is a powerful message about letting others in to your life.. and not only humans. 😉

I can’t say enough about this book. I loved it. I couldn’t put it down. There is also a build up to Eve’s brother, Val’s, story. Now I can’t wait for that one, because I know that Ms. Hoyt will not dissappoint!!

View all my reviews

Review: The Sport of Baronets

If you got to this page via a link on the Ladies of Lallybroch, this is the link to the photos from the gathering..

I started this blog on another domain name that I wasn't happy with. I decided to switch domains and start over

I moved all of my sites to a new server and was able to get this blog on the domain that I wanted.